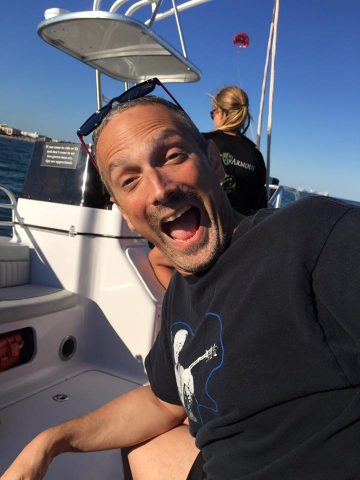 Facing a big birthday a couple of years ago, I resolved to live my personal and professional life with a new level of courage, integrity and productivity. As part of my quest I adopted a three-part philosophy, which I openly confess remains somewhat aspirational:

“Embrace the uncomfortable, move forward in the face of mistakes and allow space.”

Nearly two years into the experiment, I thought I’d take a moment to reflect here on Giving Way about why each of these three principles is important to me and to offer them to you, my fellow nonprofit leader, as tools for accomplishing your organization’s important work.

Most of us give in more than we would like to admit to the very human tendency to avoid conflict, dodge decisions and procrastinate from the distasteful or difficult. I have had the unique privilege of getting to know someone who seems to have been born without this gene. He is amazing! No matter what’s going on, he runs right into the fire… every time. Not coincidentally, he is also one of the most successful and productive people I know. His approach can be unsettling at times, but I’ve tried it on for size and let me tell you that it is immensely freeing. The positive results this practice creates are staggering.

M. Scott Peck opens his The Road Less Traveled, Timeless Edition: A New Psychology of Love, Traditional Values and Spiritual Growth with a simple idea: “Life is difficult.” So much potential gets wasted by leaders who avoid the simple truth that life is difficult. Once we accept it, it no longer limits us. How many times have you avoided an uncomfortable reality and when you finally took care of it said to yourself “that wasn’t so bad, why was I making such a big deal out of it?” What are you avoiding right now?

Move forward in the face of mistakes

A dear friend from high school recently posted a beautiful picture of herself on Facebook, along with the gloriously honest comment: “Ever take a pic and for whatever reason the light in the room washes everything out and you look like you’re not aging? And your hair turned out right for once? Well, those are the only ones I post.” That made me smile from ear to ear! Putting our best face forward is only human. While I wholeheartedly endorse the practice when it comes to Facebook photos, this tendency can be damaging in our work and personal lives.

Here is a crazy experiment: For one week, keep a written list of every excuse for a mistake you hear. I mean really listen for and record every unnecessary rationalization you hear for a simple error. Jot down on your list every example of a co-worker, friend, family member, etc. conjuring an excuse, however plausible, when a simple “Oh shoot, I goofed” would have sufficed. Make sure you also log the rationalizations you hear yourself say, either out loud or in your head. If you listen and record diligently, I promise you’ll have a long list. Guess what? None of it matters.

Whatever image you project as a leader, we all know you make mistakes. It’s okay. No, really! Your flaws don’t invalidate your greatness. As long as you’re doing meaningful work, you’ll be making plenty of mistakes (I just learned this morning of an embarrassing one I made earlier in the week – whoops!). Admit to them, fix them, learn from them. Keep going. It means you’re in the game. It’s good.

A few years back I was running an organization called Do More Mission to help philanthropists and small- to mid-sized nonprofit organizations increase their impact. I am proud of what we accomplished but I now see a fatal flaw in how I named the organization when I started it in 2009.

A close advisor had tried to warn me. Encouragement to “do more,” he explained, is the opposite of what many driven nonprofit leaders need to hear most. So many of them (us!) share the shortcoming of pushing harder and harder even when it may be time to back off and leave room for grace. I suspect he was mostly talking about me. I ignored him and pushed ahead as planned, launching “Do More,” as we used to call it for short. A couple of years later a close friend and colleague told me about a management book by J. Keith Murnighan that he said really helped him. A few days later the mailman delivered Do Nothing!: Discover the Power of Hands-Off Leadership. Strikingly, the color scheme and cover design of the book was very similar to our logo. There I was with a simple choice right up in my face Do More! Or Do Nothing!

Of all the things you have to do – and learn to do well – one of them is, well, NOTHING (suddenly, I’m thinking of George Costanza). Productive doing of nothing is an important skill that doesn’t always come naturally to passionate social entrepreneurs. I advocate for working hard, to be sure, but working smart is equally important. We accomplish the most when we do our footwork passionately and diligently, and then back off and allow space for the Divine to step in and put all the pieces together.

Whether you serve in a staff or volunteer role, try modelling these three uncommon attributes. You may be surprised how much potential they free up, and how much they can contribute to your organization’s success.